The front of the library circa 1967

The Huntsville Public Library formally opened its doors on September 24, 1967, following a community effort to support its construction and book acquisition. Prior attempts to establish a public library in Walker County met with limited success. Walker County had a public library for six years during the 1930s. The collection was housed in the Masonic Lodge. An attempt to establish a City Library was made in 1941 but lasted only a brief period.


Huntsville and Walker County were without a public library for the next twenty-five years. Efforts began in 1965 as public officials and citizens began to consider the steps necessary to support, fund, design and construct a 7,000 square foot library near the intersection of Avenue M and 14th Street. A bond proposal funding construction was overwhelmingly supported by Huntsville voters. Funding for the library combined state allocations and the issuance of city bonds exceeding $200,000. Construction was completed in the summer of 1967 and the library was dedicated September 24, 1967. 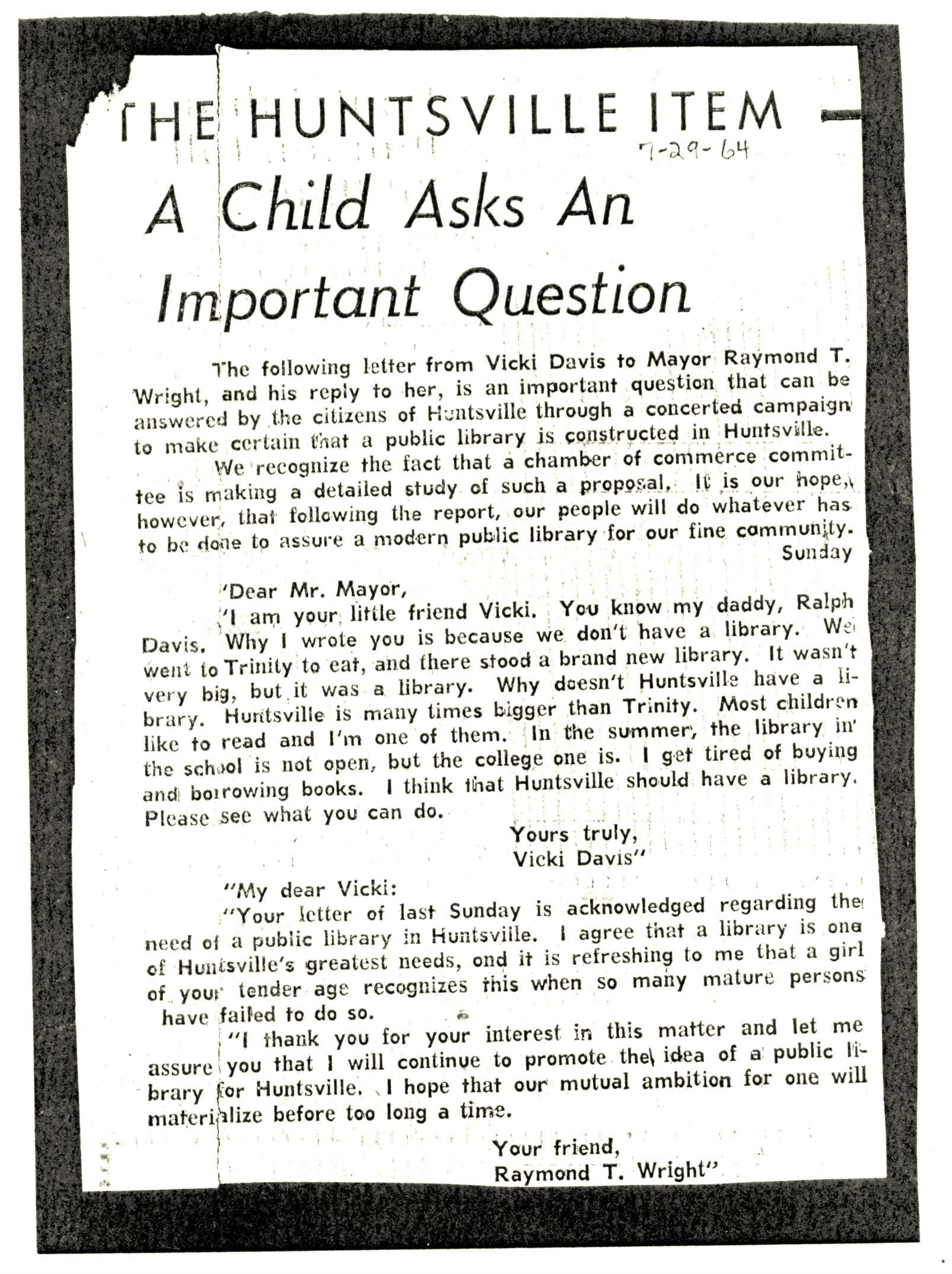 A young girl writes a letter to the Mayor of Huntsville asking for a library.

Linda Olsen Peters served as the first City Librarian. During her tenure, she organized a collection of 3,000 volumes and was said to have “excelled at promoting the library’s services to the community.” She was replaced by Linda Landtroop in 1970 who served for approximately one year before her departure to join her husband upon his return from military service.

Judith Elisor Hunter-Schreiner was hired as City Librarian in 1971 and served until her retirement in 2002. During her tenure, the library’s collection was expanded to more than 50,000 items and the familiar card catalog system was replaced with an online catalog. Ms. Hunter’s time as City Librarian is noted for children’s programs and the cooperation with the Walker County Genealogical Society to develop a genealogical collection. The Huntsville Area Literacy Council and the library partnered to provide basic adult education and English as a Second Language instruction during her tenure.

Linda Dodson was hired in 2002 to replace retiring City Librarian Ms. Hunter. During her tenure, Linda Dodson oversaw many changes in the library specifically expanding the library from a 7,000 square foot library to a 22,000 square foot building. The 2012 expansion was made possible following community and public official support. The expanded library facility provided a much needed increase in space for collection development. At the time of Ms. Dodson's retirement, the library held approximately 70,000 items and offered a wide array of activities for all ages.

Rachel McPhail became the City Librarian in 2020. Prior to her current role, Mrs. McPhail worked as the Children's Coordinator at Huntsville Public Library and received her MLS from Texas Woman's University in 2019.  Ms. McPhail continues to be invested in maintaining the library's collection of diverse materials and offering educationally entertaining activities for all members of the community.  The Library has undergone several key changes recently, notably migrating to a new Intergrated Library Software (ILS) that offers more features for patrons and staff alike.

“Transforming Lives, Enriching Families, Building Community” was adopted in 2016 as the Huntsville Public Library’s mission statement. The statement provides a guiding principle as the City Librarian and the library staff strive to provide a twenty-first-century library experience. Libraries are technology driven as advances in digital electronics advance access to information and leisure reading. The Huntsville Public Library continues to provide a relevant print collection as well as offering access to electronic resources. The library has more than forty public access computers for adults, teens, and children. The Texas State Library has made available a large array of professional databases making access to thousands of professional journals, encyclopedias, language programs, educational tutorials and informational sites readily available. Patrons of the Huntsville Public Library now have access to information that was previously only available at university and major public libraries.